Randic and Associates is a multidisciplinary office, its mail focus being architecture and design, from large scale planning to communication design. Rich with multiple expertise, our office is fuelled by talented designers and experienced architects that jointly develop projects from early sketches to on-site supervision. All of which, regardless of scale, outlines an approach that is affirmatively social in its outcome, enthusiastic in its ambition and professional in its process. Our approach aims at turning intense research and analysis of practical and theoretical matters into the driving forces of design. By continuously developing rigorous methods of analysis and execution, Randic and Associates is able to interweave innovative thinking and efficient production.

Established and directed by Saša Randić (co-founder of Randić-Turato), Randić and Associates currently employs 12 people with offices in Rijeka and Zagreb. We work with corporate, government and private clients on a variety of projects: from civic, hospitality and hotel projects, to commercial, educational and waterfront developments. We carefully limit the commissions we take on to help ensure a high degree of professional attention and overall project quality. Randić and Associates envisions itself a proactive partner to its client, rather than a consultant. The office has an extended portfolio and a practice of involving external consultants to improve the overall design intelligence of a given project team. The use of complementing teams ensures that a project will never suffer from being either too conventional or too naive.

The work of the office has been recognized for its characteristic response to the challenges of the transitional environment and use of research in the design process. This research is concentrated in the media lab named pogledaj.to (“look at that” in Croatian, the English version of the blog is names comeandcheck.it): a blog on architecture, design and other stuff, that has become the leading Croatian site in the field of architecture and design in a short timeframe, from Fall 2009. Pogledaj.to/comeandcheck.it also organizes conferences dealing with various emerging issues of zoning and planning, such as “SplitTalks 2010″ that revolved around the issue of tourist development on the Croatian coast.

www.comeandcheck.it is the media laboratory of the office; the first Croatian web site for architecture, design and visual arts initiated in 2009 (Croatian version: www.pogledaj.to). Comeandcheck.it has provided space for communication inside the architectural-construction profession, yet at the same time it is attractive to wide range of readers due to its interesting and attractive themes. The readers constantly involve themselves through the comments and that gives extra dynamic and interactivity to this media. By opening this page, the visitors in one place, every day, get the new portion of fresh information that enters the high standards of quality, relevance and interest. Although Comeandcheck.it writes about news from all over the world, the accent is put on promotion and presentation of the architectural projects from Croatia. The most recent world trend of the common web sites tells us that comeandcheck.it has been established in our market at the right time and as the relevant media it has accomplished cooperation with leading architectural portal Archdaily.com.

Saša Randić was born in 1964 in Rijeka, Croatia. He graduated from the University of Zagreb, Faculty of Architecture in 1990.

Saša Randić, together with Idis Turato, founded Randić-Turato Architects in 1993 in Rijeka, Croatia, with whom he worked until 2009. In 2009 he founded the architectural office Randic and Associates. 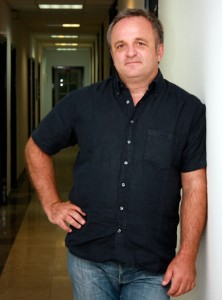